MadeByMark.com Find your path. Tell your story. Share what works.

Super Mega-Malls (and Why Whiter Is Better) 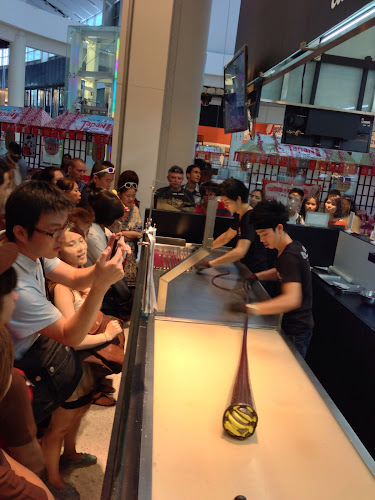 Bangkok is home to dozens of ultra-malls — bewildering, sprawling, high-tech retail centers. Malls in the United States pale by comparison. Siam Paragon is the equivalent of more than half-dozen Lenox Malls stacked on top of each other. Central World — rebuilt after it burned down during the riots two years ago — is less swanky, but just as multi-layered and frantic.

Terminal 21 at the Asok SkyTrain Station is a mall so huge it’s designed like an airport terminal, with each of eight floors decorated as different world cities. Shoppers “depart” Rome and arrive, via escalators, in San Francisco, Tokyo, London, Hollywood, Istanbul, or Paris. Storefronts (and even the restrooms!) feature elaborate architectural touches. On the Istanbul level, awnings, hanging lanterns, columns carved with whirling dervishes, and twisting passageways lend the knick knack shops a Turkish ambiance, while the restrooms in London are Tube stations (complete with life-size replicas of subway trains).

Low labor costs and the Asian passion for live demonstrations guarantee that something is always going on, from candy-making (above) to fashion shows to quintets playing pop tunes rewritten for stringed instruments. The result is a fusion of theme park and live theatre unlike anything else on the planet.

In direct opposition to American trends toward diversity and financial caution, Thai consumer culture is all about class distinction and conspicuous consumption. Your skin can never be white enough. You can never be thin enough. You must drink any number of concentrates and tinctures in order to have glossy hair, clear skin, and a higher IQ. Perfection awaits, just one laser treatment, liposuction session, and one “caucasian eye cosmetic surgery” away.

The paler you are, the more likely it is that you have escaped the laborer class and moved into office work; as a result, there are hundreds of bleaching creams on the market (and Thai women with faces actually painted clown white in an attempt to look even paler than bleaching can achieve). Billboards proclaim that “Whiter is Better,” and every single face in Thai commercials and on Thai fashion magazine covers makes me look tan by comparison.

The thinner you are, the more likely it is you’ve stopped eating street food and switched to more expensive gourmet offerings from megastores and grocery chains. And you are taking supplements, aren’t you? Because without them, you’re just average … and no one wants to be just average, do they?

Bangkok is three worlds in collision. Here, tranquil temples, saffron-robed monks, and crumbling ruins. There, inside the malls: air conditioned paradise, populated with the young and beautiful. And there, outside the malls: sprawling, steaming streets teaming with the dark-skinned, unkempt masses. And everywhere you look, there is a billboard, giant video screen, or poster making it very, very clear which world *everyone* should aspire to.

Ever since I first ran across a copy several years ago, I’ve loved El Grand Tarot Esoterico (The Great Esoteric Tarot), a Spanish deck with particularly enigmatic Minor cards. The illustrations on the pip cards — rife with butterflies...

The folks at OKCupid.com have a simple gaydar test. The computer randomly selects pairs of photos from member profiles. You test your gaydar -- your ability to recognize, on sight, who's gay and who's not -- by indicating which of the two people...

Top Ten Things to Hate about Life on Crutches

10. Wet asphalt. With the slightest shifting of my weight, one crutch is bound to go flying out from under me. All I can do is take very short steps and hope for the best. 9. Hardwood and tile floors after crutching across wet asphalt. At first...

(Photo Credit: KrogStreetMarket.com) I read the text message from my friend, J. I pause. I read it again. “Let’s have dinner at Krog Market.” I shake my head. He wants to have dinner at a Kroger? I picture our party of four piled...